Bernard Leon  Gritten was born July 7, 1924 in Harveysburg Indiana to Alva H. Gritten and Evalena Shoaf. He was their second child; his siblings included an older brother Fred (1920-1992) and a younger sister Ruth Marie, who tragically died at one year of age (1927-1928). His father was in the “junk business” as the manager of a junk yard, and also a farmer. The family resided in the small rural township of Fulton in Fountain County Indiana and later in Kingman Indiana, also in Fountain County. Bernard enlisted in the army as a private on April 7, 1943. His brother Fred also joined up in September of 1942, and his cousins Alvin and Calvin joined the month before he did. Because he shipped out for basic training, Gritten missed his highschool graduation where his class hung a "star" on his chair for the ceremony.

“Mutt” as Bernard was known, belonged to the 194th Glider Infantry Regiment,  and the 17th Airborne Division. (Later the 17th joined the 82nd Airborne, also known as the “All Americans”.) He trained to be a paratrooper (parachutists who jumped from aircraft, landing behind enemy lines). He was also assigned as a driver for officers of the Regiment. He trained at Camp Mackall North Carolina, and Camp Forest in Tulahoma Tennessee. He served with honor, participating in Operation Market Garden, The Battle of the Bulge and the Allied Occupation of Germany.

Following the Occupation of Germany, until the war with Japan ended with the dropping of the Atomic bomb, Gritten thought he might be sent to fight in Asia, but instead, he returned home to start a family and take up his life in Indiana. After he returned home via the Queen Mary oceanliner, Mutt married his fellow Kingman High School graduate Nellie Pauline Wilson on August 3, 1946. Her wedding dress, like many paratrooper's brides', was made from his parachute. They had three children, Suzanne, Diane and Randy. Mutt Gritten drove a grain truck for a living for many years and owned a farm in Kingman Indiana. In 1949, while on a trip to deliver cargo to Tennesse, his father Alva Gritten was killed in a freak accident when the bridge they were crossing collapsed. Mutt, who was driving, survived the shocking plummet into the river in part because his swimming skills were honed in the military. Later, in the 1980s, (back when safety standards were more lax )he sometimes let his grandson Kevin sit on his lap while he drove his truck. Kevin didn't grow up to be a truck driver like he wanted to when he was a child and he could name every type of truck, but he was inspired by Mutt's WWII service and his other grandfather John Brown's WWII service as a flight instructor, to be a pilot. Mutt's son Randy Gritten is a distringuised Indiana State Trooper. He is a Squad Sergeant and former head of the governor of Indiana's security detail. Diane works for the for the county in Shelby county Indiana, and Suzzane is a retired office worker. When Bernard Leon "Mutt" Gritten died in 2012, he was survived by his wife Nellie, three children, eight grandchildren and nine great-grandchildren.

Following graduation, Nellie Wilson, aged eighteen, traveled to San Francisco California, where she found work at the Letterman Army Hospital in the Presidio, assiting the staff by delivering meal trays to the patients. Nellie was not unacustomed to hard work; her letters to her sisters at home often ask about their farm work duties. Nellie appears to have travelled with friends and possibly family from Indiana out west on a train, perhaps, hoping to contribute to the war effort. Like many women of the time, she joined the workforce, not just as an individual, but as part of a wave of women moving outside traditional occupations. War occupied a large percentage of the able bodied male population, leaving lucrative factory work and other necessary positions unfilled, opening up opportunties to a large number of American women to enter the workforce outside the home where they earned competitive wages. 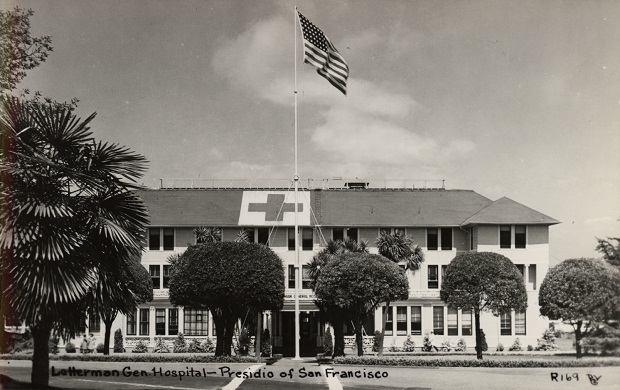 Nellie found work at the Letterman Army Hospital in San Francisco California. Founded in 1898, during World War II, Letterman received wounded military personelle from the Pacific Theater.  According to the National Park Service website, "In 1945 alone Letterman General Hospital received more than 73,000 patients." Many of the patients during Nellie's tenure in1943 suffered from "Frozen Feet", "also known as, "Invasion Feet". Many of Nellie's letters home speak of amputations and other suffering due to "frozen feet" damage incurred in thewar in the Pacific. Nellie appears to have worked delivering meal trays to the patients. She worked on wards with all male and also all female patients. In San Francisco, the young Hoosier encountered a totally different  environment in the diverse cosmopolitan west coast city, but seems to have suffered no discernable culture shock. She worked hard and enjoyed a wide variety of new social experiences, from visiting Chinatown, to going to the beach (and getting sunburned), to meeting people from all over the country of different backgrounds and races. She writes in one letter shortly before her return home that it will be different to not be around "a million people" all the time. For three months, she enjoyed the social whirl of San Francisco in 1943. There she earned $65 one pay period, and sent the money home to repay her parents for fiancing her trip. Her compensation included two meals a day at the facility in the Presido. Nellie's letters offer the perspective of a young woman on homefront participating in the war effort, which compliments her future husband Mutt's WWII letters about his training and overseas combat experience.

After the war, Nellie Pauline Wilson married her old high school friend Bernard Leon "Mutt" Gritten in August of 1946. Like so many of the women who worked outside the home en masse during the war, she joined the ranks of married couples committed to building a new life in prosperous post-war America. As a bride of a paratrooper, her wedding dresswas made from parachute silk he brought home. She was a homemaker and the mother of three children, Suzanne, Diane and Randy. She was very involved in her church and according to her grandson Kevin, " always had a big garden and did a lot of canning. She loved to sing, especially hymns." For more photographs and documents, browse the"Mutt and Nellie Gritten" collection or click here.___